Nature Reserves
There are nine nature reserves in the Courmayeur and Aosta Valley.
Cote De Gargantua – (Gressan) with its' well-preserved evidence of the Wurmian Quaternary glaciers depositon on the main valley bottom.  Fauna mainly consists of reptiles, birds and small rodents,lizards  Flora includes rare plants such as the Alpine Dauphine 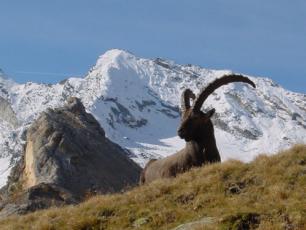 Lake Lozon – (Verrayes)  A rapidly drying lake on a glacier terrace, in the heart of a dry region.  Home to rich zooplankton with more than 30 species including numerous invertebrates such as the common toad and red frog, over one hundred marsh species of which some are rare and unique to the Aosta Valley.

Les Iles (Brissogne)  Situated on the Dora Baltea river, the reserve has two quarry lakes and is an important regional stop over and feeding ground for migratory birds.  Home to amphibians, reptiles and in the lakes; tenches and pikes.

Holay Pond (Pont-Saint-Martin) – the natural reserve covers 1,5 hectares at an altitude of 750m-790m, near Suzey Castle.  The only area in the Aosta Valley where you will find spatulaleaf loosestrife.  Includes some rare amphibian species.

Marais (La Salle) – Located near the dam along the Dora Baltea river between the towns of La Salle and Morgex.  A stopover for wetland migratory birds.  Wild ducks, gallinules, reed warblers nest here.

Parc Animalier d'Introd (Animal Park) - a park where you can observe, discover and understand providing a nature lesson for young and old alike.  Located in Introd not far from Courmayeur.  Open everyday from from 09:30am till 18:00.