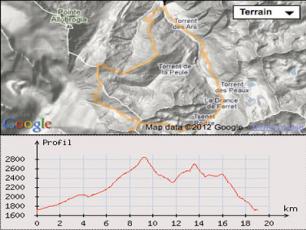 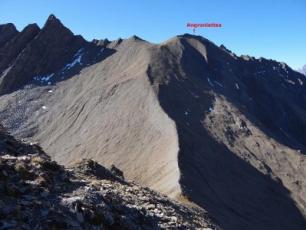 From the village of Ferret, a few kilometers above the Fouly in the Swiss Val Ferret.
After 1km of paved road quiet, a fork, take the right track amount in Plan de la Chaux.
Below the cow barn Top of Ars to follow the good little track that overlooks the river and easily leads to Vacherie Mount Percé (2023m).
Then increased by a not always well marked path (Sentes many herds) the valley of Ban Darrey. Some rolling especially at the beginning and then a large plain of the valley to approach parts of the neck. Otherwise pushing (difficult with many small steps formed by herds) or portage.
Thus easily accessed neck Ban Darrey.
From the pass, follow the little path traced on the edge, leading to the Aiguille des Angroniettes. Steep climb of 160 m of D + on a slate scree field end. Join a collar may easily descend to the valley of Bella Comba (large scree slope purposes).
From the pass is it easy to direct right onto a 1st summit. From there an easy ridge (not path) allows to reach the top of the W of the needle Angroniettes (2,858 m).

Magnificent view of the entire chain of Mont Blanc, Mont Blanc Mont Dolent itself through the Grandes Jorasses and the Aiguille de Triolet.
Across the views of the Grand Combin and the needle Vélan is also beautiful.
The summit is marked on the map the Escursionista n°1. On the Swiss Map, it is difficult to know if the name does not refer to a rocky peak at the W cervical whose height is slightly greater than 2882m.
Anyway the descent is made from the top of 2858m. Almost flat and thin enough portion of the terminal edge is not cycling. More on scree end leads down on the bike (T4) with a passage on the edge arriving above the neck, very steep, laces tight. I'm not gone on the ATV because of my average technique and the presence of frozen snow on the trail but a good technician in good condition should be able to spend all on the bike (T4 - T5 for passage in this case).

From the pass descent slope Italian Val Ferret. The trail traverses a first end scree crowded places this snowy day forcing me to dismount places (presumably T4 for this part).
After an easier way, the trail crosses the stream (NR few meters) before taking a walk on scree. The path marked on the top of the scree, disappears after a lace.
It is quite difficult to skim the top of the scree on the bike (T4/T5). Then descend at best freeriding in the scree (which becomes easier, a few cairns) failing away too much throat Torrent (a trail at the top of the scree runs in crossing to the left do not follow).
Down the scree, cross the river again and follow a poorly marked path (some yellow traces markup) orographic right bank. Do not be tempted by the path that looks better on the left bank, then it goes back through to reach the Alpe sup Pré de Bar).
The bike trail is right bank almost entirely but not very nice, because they are poorly marked, in crossing and partly worked by herds (T4 overall).

Throughout this part of the journey, I have met anybody outside the shepherd of Mount Percé.
The trail then joined the wide, busy and very deteriorated trail climb to the Grand Col Ferret taken by the Tour du Mont Blanc. Interlude in this round, otherwise very wild.
From the pass, head south (markup Small ferret collar). Let the good path to mount directly on top of the head by a Ferret right path traced in the slope (170 m portage painful D +).
At the top the view is just as beautiful as that of the Pointe des Angroniettes with both sides both Swiss and Italian ferret vals extended by the Val Veni whose ends fade away into the mist.

The summit of the head Ferret, free ride downhill along the ridge southeast. Only a short steep portion has not allowed me to stay on the bike. Otherwise choose your path without too much away from the edge. Crossing point side 2498m before reaching the edge of Plantins.

A small path that runs slightly uphill grassy ridge dotted with small lakes (puddles). Thus easily reached (alternating passages on the bike and pushing) the top of the Dotse 2492 m.
The Dotse head north down to the nearest ridge, crest Létemaire. A small narrow path, dug in places, poorly marked traverses this edge. Very technical descent with (at least for me) quite a number of short passages NR breaking the pace a bit (T4 to T5 claimed that the hardest passages on the bike or not you pass).

At the bottom of the ridge, do not turn to the left (trail in vernes) but take the best right to join the good path connecting La Fouly and Ferret Alp The Fulani.

Follow this path to smooth coating, nice after trying previous descent. Skip to pasture From Plampro. At a junction, turn right towards Ferret. A difficult passage in roots and slight rise after crossing the river on a bridge to reach the starting point.