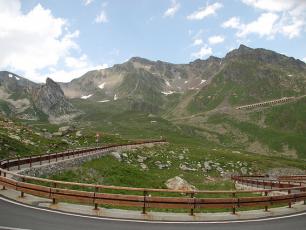 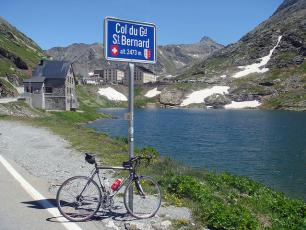 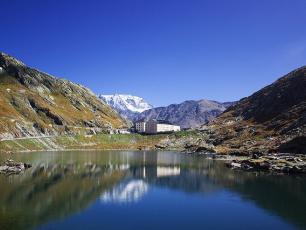 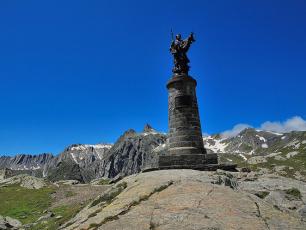 SWITZERLAND: A toll is payable to use the Grand Saint Bernard Tunnel even if you have the Swiss Autobahn vignette(an annual motorway tax displayed on your windscreen by a vehicle sticker/vignette which is compulsory even if you are travelling on any of the Swiss motorways for only 1 or 2 hours). The Great Saint Bernard Pass is not a motorway so you do not need to buy the vignette unless you are planning on travelling on Swiss motorways/autoroutes/highways.

During the winter months the Tunnel may be closed - check the weather and traffic conditions before you set off.

**There are also substantial discounts for buying more journeys: more info here.
The pass has been used for over 3,000 years to cross the Alps. St. Bernard de Menthon opened the Hospice in the 900's to provide a safe haven for travellers and it is here where the Saint Bernard Dogs earned their legendary reputation as rescuers of travellers lost in snow - the Saint Bernard dog is the icon of the Alps! The Hospice is still operational today. Visit the Hospice Museum and Saint Bernard Dog breeding kennels during the summer months.
The Hospices of the Grand Saint-Bernard is open to the public all year round (and lodging).
The Swiss National Day is celebrated on the 1st August with fireworks display behind the Hospice du Grand Saint-Bernard. Distribution of mulled wine will help you stay warm at 2,400m
Every year in the middle of August, the Association Pro-Saint Bernard organizes a mass around the statue of Saint Bernard. Various folklore groups from the Aosta Valley and Valais ensures a great atmosphere  and a giant polenta to welcome you.
In winter, the Col du Grand Saint-Bernard is swept by strong winds and impressive snowstorms. Access is only possible on skis (approximately two hours) in a dream-like setting but becareful of avalanches!

For more information on the Grand Saint Bernard Tunnel:

This is one of the highest cycling cols in the Alps with an elevation of 2,469m (8,100feet) and one of the longest at 45km from the Swiss side.

Part of the route is on a main road with alot of traffic, trucks and tunnels. Once you get to the huge tunnel, take the small turn off just before the tunnel and onto the old road where trucks are forbidden.

Starting from Morgex and finishing at Bourg-Saint-Maurice.

The col ascent of 1,282 and a distance of 27.6km - averaging 5%.  The top is a huge statue of Saint Bernard du Menthon on the French/Italian border. From this point its about 31km going downhill to Bourg-Saint-Maurice.