The first two cabins of the New Mont Blanc Cable Car, an architectural and engineering phenomenon, arrived in Courmayeur during the night of Sun 20 Oct 2013.

Mon 21 Oct 2013 the two cabins were assembled on the first of the two sections, between the Pontal d'Entreves station and La Palud station. The work was done by the employees of the company Doppelmayr, which runs the construction of the new cable car since 2011.
From 2015, the new cabins will carry 80 people, instead of the current 20. They will rotate through 360 degrees during travel, allowing tourists to see the surrounding landscapes.
The Austrian company Carvatech has designed and built this two white pearl cabins. The new cabins are equipped with a heated floor and anti-fog glasses to prevent condensation. The video cameras, placed at the bottom of the cabin, take the views beyond the cabin itself, streaming on the screens inside the cabin. This allows tourists to have a 360 degrees view during their travel.
The screens inside the cabins will also provide information about about weather, temperature, avalanche danger and other useful information for tourists.
The new Mont Blanc Cable Car will eliminate the long queues, improve comfort and make the route to the Europe's highest peak, quicker, more comfortable and more informative.
Read more about the New Mont Blanc Cable Car. 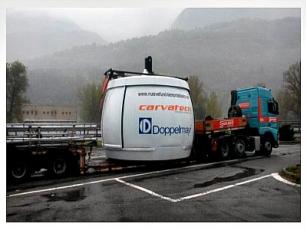 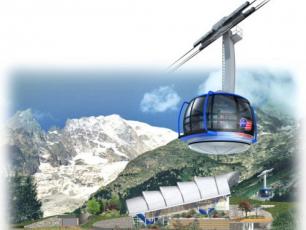