Aosta Town is the capital of the Aosta Valley and the largest town in the region surrounded by snow-capped mountains.   Aosta, the ancient Augusta Praetoria, was inhabited by a Celtic-Ligurian population, called Salassi; the nit became an important Roman defensive outpost, equipped with villas, forum, theater, thermal baths and amphitheatre.  It was located in a very suggestive natural basin and it is rich in monuments of great value. 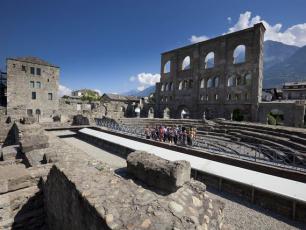 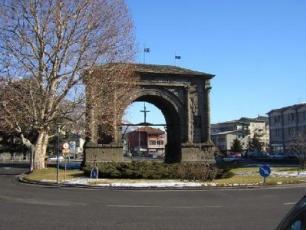 Aosta stands at the junction of two of the important trade routes that connect France and Italy - the valleys of the Rhône and the Isère.  Aosta's significance as a trading post was recognized by the Romans, who built a garrison here in the 1st century BC.  The present-day layout of streets is the clearest example of Roman urban planning in Italy. The well-preserved Roman walls form a perfect rectangle around the center of Aosta, and the regular pattern of streets reflects its role as a military stronghold. Saint Anselm, born in Aosta, later became England's Archbishop of Canterbury.
The centre is enclosed by Roman walls with cobbled streets, rich in monuments from pre-historical,roman, medieval and later times.  In Italy it is classed as 'the most Roman town after Rome'.  Aosta has a relaxed feel and the city is clean and organised with a population of about 35,000.
Shopping and dining:  you can find a selection of shops selling delicious local delicasies, arts and crafts, a large selection of restaurants to sample the local dishes and plenty of bars and cafes to sustain you.
Sights not to be missed in Aosta:-
- The Cryptoporticus - The forensic complex acknowledged at the end of the 60's develops on one longitudinal axis, proceeding with different levels of open spaces and arcades, with degrading altitudes from north to south
- Archaeological Museum - unique Roman works of art, collection of coins spanning Ancient Greece to the Savoy kings
- Amphitheatre - (in the monastery of Santa Caterina) which could hold up to 20,000 people
- Roman Bridge - a perfectly preserved bridge of 17.16m wide over the Buthier River which is still used today even though the river changed its course a long time ago and no longer runs under the bridge
- Piazza Chanoux - in the main square of the city
- Saint Martin de Corleans - contains one of the greatest concentration of megalithic monuments in Italy
- The Praetoria Gate - few examples of the Roman times still perfectly intact
- Augustus' Arch - At the eastern entrance to Aosta, in the Piazza Arco d'Augusto, stands the Arco di Augusto (Arch of Augustus), built in 25 BC to mark Rome's victory over the Celtic Salassi tribe. (The sloping roof was added in 1716 in an attempt to keep rain from seeping between the stones).
Two master pieces of medieval art featuring amazing Ottanian frescoes:  the Cathedral and San'Orso
The Cathedral - beautifully carved 15th century choir stall and a small museum housing early 5th century ivory diptych.  The museum is open all year round but closed on Mondays.
Sant'Orso - the finest church reknowned for its 11the century crypt and the wonderfully carved columns of its cloister
Opening Hours
From 1st October to 28th February:-
10:00-12:30 / 13:30-17:30 (weekdays)
10:00-12:30 / 13:30-18:30 (Sundays and public holidays)
From 1st March to 30th September:-
09:30-12:30 / 14:00-18:00
Prices:  Entry to the Collegiate Church of Saint is free
**Sant 'Orsa Fair, an annual event, dating back to 1000's is held each year in the centre of Aosta on the 30 and 31 January a craft fair attracting visitors from afar with various artefacts; beautifully crafted wooden objects, wrought iron, soapstone and straw products, woollen fabrics, lace, furniture, sculptures etc. are sold at market. Taste the local coffee specialty known as 'the cup of friendship'.
For more information...
Comune di Aosta
Piazza Chanoux 1 - 11100 Aosta
+39 0165.3001
+39 0165.45603
protocollo@comune.aosta.it
Parish of Saint O'rso
Piazetta Saint'Orso
11100 Aosta (AO)
+39 0165.262026
Tweet